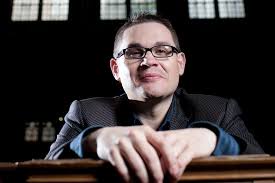 Professor Paul Mealor's Symphony No 3 'Illumination' was premiered on Friday 30th November by the BBC National Orchestra of Wales in Hoddinott Hall, Cardiff, conducted by Geoffrey Paterson. The work was also recorded and broadcast on 3rd December on BBC Radio 3 and received rave reviews and huge audience appreciation.

The Guardian wrote of the work, ‘A quotation from Paradiso, the third and last section of Dante’s The Divine Comedy, provides the starting point for what is Mealor’s perpetual concern: the search – if not for paradise itself – then for a state of meditative and spiritual grace. In his single-movement 35-minute structure, tuned wine glasses, chosen for their aural purity, combine with celeste, bowed percussion and the upper octaves of the piano and strings to create a glistening soundscape, static and impassive. This material is organically connected to hugely contrasting passages of full-blown brassy lushness, a tumult of ascending and descending scales finally extending even to tubular bells.’

‘Paul Mealor’s Third Symphony, over half an hour long, was most definitely not a light-hearted piece, although the notion of light lay at the core of its single movement. In a most informative programme note (and a spoken introduction) the composer showed how he had drawn inspiration from the final Paradiso section of Dante’s Divine Comedy. The last part of the poem has always tended to be somewhat neglected by composers of works on Dante, who have inevitably been drawn to the more dramatic (and more grisly) elements of the descriptions of the earlier sections. Even Liszt in his Dante Symphony, after two substantial movements devoted to hell and purgatory, restricted his depiction of heaven to a choral setting of the Magnificat with the rising thirds of the plainchant moving inexorably upwards. Mealor took the same sequence of notes not only as a binding theme throughout the symphony but also as a launching pad for a series of very beautiful (indeed heavenly) string melodies in a passage which the composer described in his programme note as ‘unashamedly Romantic’.

These episodes are surrounded by passages which the composer terms ‘music in between the notes’, sections bordering on the brink of inaudibility in places which make use of various effects: a gong suspended in water, string bows used extensively on both pitched and unpitched percussion, harmonic glissandi in the strings like birdsong, and most effectively of all the use of multiple wine glasses to provide a shimmering tintinnabulation which launches the music on its course. At the other extreme comes the very end of the work, where a slowly and impressively constructed climactic chord leads onto a duet for two sets of tubular bells engaged in clangourous competition. This is so effective that one hardly needs the final chord to bring the work to its euphonious conclusion.’